This book explores that phenomenon and the considerable amount of evidence pertaining to it in the primary sources written in the period.

The author takes into account the use of spoken Latin both inside and outside the academic world. Examining disputes over pronunciation and different views about ex tempore eloquence among Latin writers active in the sixteenth and seventeenth centuries, the author shows that these 'conversations' are not unrelated to much better known discussions and debates about the nature of Latin prose style and eloquence in an age when Latin was no one's native language. The book thus reveals that understanding the role of conversation and ex tempore expression in Latin helps us to understand the early modern phenomenon of Neo-Latin in general. All texts in this volume are in Latin. 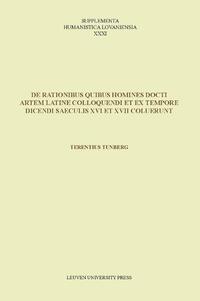