Quaternary research in Britain and Ireland

a history based on the activities of the subdepartment of quaternary research, university of cambridge, 1948 - 1994

During the later part of the last century there was rapid development of the study and understanding of the changing environments of the last 2 million years. This came to provide a firm background for today's knowledge of the significance and importance of climatic change. Interdisciplinary research has been a prominent, if not essential, contributor to the successes achieved. In illustration of this connection, I describe here such developments in the University of Cambridge. In 1948 the University established a Subdepartment of Quaternary Research, with teaching and research activities covering geological, biological and archaeological topics. An interdisciplinary approach was an essential ingredient, and the research covered both terrestrial and marine spheres. The book traces the history of Quaternary research in Britain and Ireland, particularly the continental influences which stimulated research and indeed led to the establishment of the Subdepartment.

The early years of the Subdepartment were an exceptionally exciting time for Quaternary researchers. This period saw the development of radiocarbon dating and of marine geochemical studies, together with the improvement of interpretation of palaeobotanical data, and the consequent incorporation of a vast accession of new information relating to these subjects. Stratigraphy, the binding topic of Quaternary research, became much better understood: first, in the terrestrial sphere with the formulation of divisions of the Quaternary based on accepted geological principles and providing a measure of the passage of time to students of the several disciplines involved, including landscape history, ecosystem history and archaeology, and secondly in the marine sphere a formulation of units defined by isotope studies.

Research topics and their development are considered one-by-one, and the numbers of publications in each sphere are summarised over the life of the Subdepartment, giving a clear view of how research developed over the period of 45 years. These activities were brought to an end in 1994, with the dissolution of the Subdepartment, which is described, together with a discussion of achievements and the voicing of some reflections.

In a final part, I take a wider view of the history of Quaternary research, with aspects of geology and biology considered, together with notes on the Quaternary community, research support and journals.
0 | 0 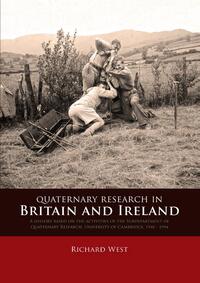