The Rise of the Empire: Star Wars

"Compelling . . . The villains of Star Wars are as much fun as the good guys."-New York Daily News

Under Governor Wilhuff Tarkin's guidance, an ultimate weapon of unparalleled destruction-the so-called Death Star-moves ever closer to becoming a terrifying reality. Until then, insurgency remains a genuine threat. Guerrilla attacks by an elusive band of freedom fighters must be countered with swift and brutal action-a mission the Emperor entrusts to his most formidable agents: Darth Vader, the fearsome new Sith enforcer, and Tarkin, whose tactical cunning and cold-blooded efficiency will pave the way for the Empire's supremacy-and its enemies' extinction.

"A story with pacing and dialogue that feels like classic Star Wars."-Nerdist

Ever since the Jedi were marked for death, Kanan Jarrus has devoted himself to staying alive rather than serving the Force. So when he discovers a conflict brewing between Imperial forces and desperate revolutionaries, he's not about to get caught in the crossfire. Then the brutal death of a friend forces him to choose between bowing down to fear or standing up to fight. But Jarrus won't be fighting alone. Soon he is joined by Hera Syndulla-a mysterious agent provocateur with motives of her own-in challenging the Empire for the sake of a world and its people.
0 | 0 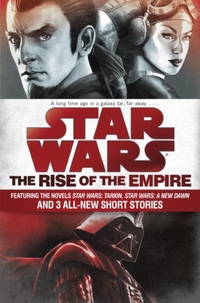